H ere I’ve used a pick-up band to trim a wool bag that I wove on a rigid heddle loom and then fulled (felted). The band does double duty—first by encasing the raw edge of the top of the bag, which was folded to the outside, and second by providing a decorative finish and focal point for the piece. This leaves the inside of the bag completely smooth, and there’s no need to add a lining. The bag is about 10″ wide and 13″ tall. I’ll use mine to hold a bandweaving project-in-process, or a boat shuttle and quills for my floor loom, but a handy bag like this has dozens of possible uses. Here’s how I made mine.

Weaving the Band for the Trim

For my band I used a simple hatched diamond (a common motif in Norwegian pick-up bandweaving). I like to weave this pattern with the diamond side up, but I used the reverse side of the band for trimming the bag. My patterns chart is shown below and I’ve included both sides of the band so you can work with whichever side you prefer.

Below is another version of the chart, in which I’ve marked the first repeat with caret symbols (for pick-ups) and Xs (for push-downs), a system that is explained on pages 128-29 of the book. This can be helpful for beginning pick-up weavers, but experienced pick-up weavers don’t need the symbols—they have a visual understanding of the motif as a whole and can quickly glance at the fell line to see which ends need to be manipulated on each row. And weavers who are using the pattern heddle also don’t need the symbols, whether they are experienced or not, since the pattern heddle operates on a different system and such symbols would be a distraction. 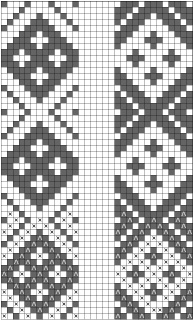 If you want to change the look of the diamond along the length of the band, here are some variations to try.

And here is the same chart showing the reverse side.

Weaving and Fulling (Felting) the Bag

In small proportions we just beauties see; And in short measures, life may perfect be.

© Heather Torgenrud, 2014-2015. Unauthorized use and/or duplication of this material without express and written permission from this blog’s author is strictly prohibited. Excerpts and links may be used, provided that full and clear credit is given to Heather Torgenrud with appropriate and specific direction to the original content.
Loading Comments...
%d bloggers like this: